Zwapgrid is a Swedish company that helps software companies build integrations between different systems. With more than 500 ready-to-use integrations, Zwapgrid offers effortless solutions for data streaming. As the number of clients and integrations increased, the company was faced with needing to augment their development capacity.

They previously reached out to other developers via Freelancer.com, however, the partnerships weren’t successful. Communication with the hired developers crumpled because freelance programmers tried to conceal the issues and portray that everything was okay, rather than discussing and fixing the glitches.

After two unsuccessful attempts to hire freelance developers, Zwapgrid chose to partner with Beetroot. They wanted Beetroot to assist them with building close and uninterrupted communication with developers, to ensure their team feels included with Zwapgrid while working remotely.

With eight remote developers on board, communication and internal climate gained significant importance. You need to be very specific when explaining a new task. It is crucial to building trustful relations with a team so that when you are asking them to do something stupid they feel secure enough to tell you that you are wrong.

Zwapgrid began by hiring two experienced developers, Anton and Kate. Although Zwapgrid’s work is rather challenging from a technical standpoint, the new hires understood the specifics and were able to quickly unite with the Swedish team.

After hiring four additional team members, good communication became a challenge. Zwapgrid’s CTO was spending an excessive amount of time helping new team members tackle technical and organizational problems, which was slowing down his own working process. With that in mind, Zwapgrid decided to promote Anton and Kate to tech lead and team lead positions. Currently, the two oversee routine issues and technical questions, allowing the Swedish team to focus on strategic solutions specific to their area.

The speed of delivery was still less than desired, which prompted the introduction of another solution. The team reviewed their working process and realized that the two units — the Swedish product team and the Ukrainian development team — were spending more time than needed to synchronize and wait for each other’s response. Zwapgrid decided to optimize the team structure by forming smaller units consisting of one product lead and three dedicated developers. The proposed solution strengthened communication and resulted in high-speed delivery.

Treat developers as actual employees, don’t see them as some consultants that help you for a while. Use Slack or any other communication tool and sync with your team even 250 times per day if necessary. Also, it’s a good idea to invite your developers to come and stay in the head office for a month or two to give them a better understanding of how you think and how you work.

Zwapgrid does not have fixed projects with start and end dates, which makes it difficult to estimate exact results and efficiency. However, they are confident in sharing how the Ukrainian team has helped with the continuous improvement of their platform. They are also seeing a large number of integrations quickly delivered in an improved and smooth manner. The team now consists of eight developers, as two more are about to be hired. At the start of the cooperation, Zwapgrid desired Beetroot to provide them with solid HR service, ongoing maintenance, and skilled developers. We feel these desires have successfully been accomplished.

What we were looking for and found with Beetroot was close cooperation and proper employees. It’s always hard to start up a development team, and it doesn’t matter whether it is in Sweden or Ukraine. However, working with Beetroot, we can scale the benefits of someone taking care of all the administrative work, HR functions, or things like renting an office in Kyiv. 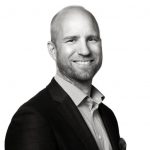